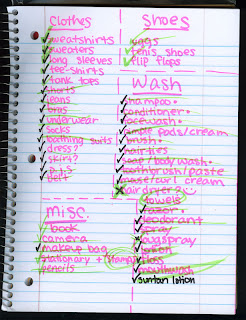 Her roomed looked the same as it had an hour ago, piles of cloths everywhere, tables and dressers covered, a suitcase being packed for 2 weeks of summer camp. I'd been reminding her to clean her room before she leaves the next day. "What have you been doing, you room looks the same as it did an hour ago?" I said. "Oh my whites are still in the laundry and I have this thing about not being able to clean up until I finish packing," she said.

My inner circuits went on the glitch... if you where here now I could make the sound and show you how my eyes bugged out and my head twitched like a robot malfunctioning. I needed to leave the scene... I gotta get out of here > NOW~! Everything about what she and her younger sister were doing went against my very nature as a man and a once teenage boy. I know we (guys) get obsessed over other things, but spending a great deal of time and energy on what to wear on each day, doing several loads of wash, packing, repacking, checking the lists is.... not my thing.

One thing I have noticed that I think is really interesting is that girls getting dressed up is really for other girls and not so much for guys. Sure guys are up there on the list, but it's a chic world for them. Check who is really checking each other out, who appreciate and even acknowledges the way they have changed their hair, their new skinny jeans that kinda look like all the other ones they have. It's the other girls.

When I take my space and unplug from the scene then I get it, it's a girl thing, a teenage girl thing and I can relax. I can appreciate who they are and what they are doing and let them be. I can even enjoy it, glad it's not me, even feel sad... for them that so much of their time and energy goes into this direction when it's been said that if women could put some of that time and energy they put into being in front of the mirror the world would be a better and different place.

And I feel sad that I can' really personally relate to it and miss having them do things with me that I like to do like play video games, watch sports, go hunting and kill things, read the paper, drink beer - ha..... just kidding, got you didn't I? But think about it, a teenage boy (we call them young men and women) is obsessed also probably about the same degree into other things. Let's see, I was into getting outside and exploring nature, minibikes, sandlot football, girls, and eventually art.

The girls had slept in on this day. We just got back from a vacation in Hawaii which is different time zone. When the younger one got up after noon it was around 9am Hawaii time. When I went to check in on the older one she was still in bed on Facebook. "Hey.... you are still in bed, you haven't been outside at all today, get up and off Facebook, it's 4pm."She thought I was joking about the time until she looked.

She never did get outside, and her room never got cleaned up, she said she'd do it next morning before she left, like that ever happened.

The younger one had to get outside because her house chores are to wash the cars and she had 2 to do. We recently traded this chore because she refused to do any gardening because she has an ungodly afraid of spiders. Whose kid is she anyway? The world is full of spiders. I tell her that they are her "power animals, her teachers of fear," she hates when I do that! That night she came down twice not able to get to sleep. She was so tired and anxious about camp that she just couldn't let go and it was getting to her. I hung with her twice, the second time rubbing her feet I pulled on a toe that was.... unknown to me recently jammed and it now hurt her more than it did before. She started to cry, and I knew that was the best thing she could do, let it go, just release it, everything that a young girl cries about, all the known and unknown things the world has to offer. She asked me to stay until she fell asleep, I said yes, and did.

I feel for these young people, connected instantly to friends but in short sentences and words, separated by the digital, unconnected to nature, and to parts of themselves. But I am sure my parents thought the same way about me, about my piers, maybe too much TV and stuff? Well, I send all the young people blessings, I bless you all!